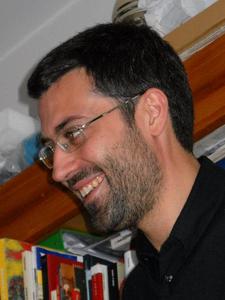 Andrea Bajani (born August 16, 1975) is an Italian novelist, poet, and journalist. After his debut with Cordiali saluti (Einaudi, 2005), it was Se consideri le colpe (Einaudi, 2007) which brought him a great deal of attention. Antonio Tabucchi wrote about his debut novel, "I read this book with an excitement that Italian literature hasn't made me feel in ages." The book won the Super Mondello Prize, the Brancati Prize, the Recanati Prize and the Lo Straniero Prize. After three years, with his novel Ogni promessa (Einaudi, 2010; published in English as Every Promise by MacLehose Press), he won the oldest Italian literary award, the Bagutta Prize. His collection of short stories, La vita non è in ordine alfabetico (Einaudi, 2014) won the Settembrini Prize in 2014. His most recent novel is Un bene al mondo (Einaudi 2016), and is currently being made into a film. In 2013 he published Mi riconosci, a moving homage to the famous Italian writer Antonio Tabucchi.In 2017 Einaudi published his first book of poems, Promemoria. The second one, Dimora naturale, will be published in May 2020. He is also an author of journalistic essays and regularly contributes to the daily newspaper la Repubblica. Bajani taught Creative Writing at the Scuola Holden in Torino, and has been Chief Editor for Italian fiction at Bollati Boringhieri publishing house since 2017. A book of literary criticism analyzing his work, written by Sara Sicuro and entitled Andrea Bajani. Una geografia del buio, was published in 2019.
Read more or edit on Wikipedia