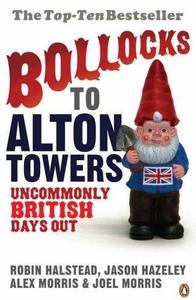 Bollocks to Alton Towers: Uncommonly British Days Out (ISBN 0-14-102120-9) is a humorous travel book written by Robin Halstead, Jason Hazeley, Alex Morris, and Joel Morris (the creators of The Framley Examiner), which showcases unusual attractions, left-field museums and one-off days out in the United Kingdom. The introduction describes the book as "a collection of the underdogs of British tourism... [that] say more about Britain and the British than any number of corkscrew thrill rides or high-tech Interactive Visitor Experiences." The book was published in hardback by Michael Joseph Ltd (an imprint of the Penguin Group) in 2005. It was also published in paperback by Penguin Books in 2006. The book received favourable reviews from The Times, The Press, and The Daily Telegraph. A sequel, titled Far From the Sodding Crowd, was published in hardback in 2007. A paperback edition, More Bollocks to Alton Towers, (ISBN 0-14-102785-1) was published in April 2008. A short documentary, Far From the Sodding Crowd, was made in 2009 and features some of the attractions included in both books, as well as writers Jason Hazeley and Joel Morris.
Read more or edit on Wikipedia