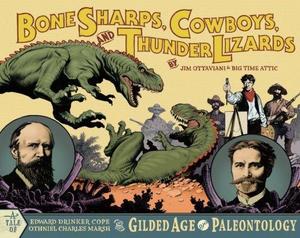 Bone Sharps, Cowboys, and Thunder Lizards: A Tale of Edward Drinker Cope, Othniel Charles Marsh, and the Gilded Age of Paleontology is a 2005 graphic novel written by Jim Ottaviani and illustrated by the company Big Time Attic. The book tells a fictionalized account of the Bone Wars, a period of intense excavation, speculation, and rivalry in the late 19th century that led to a greater understanding of dinosaurs and other prehistoric life. Bone Sharps follows the two scientists Edward Drinker Cope and Othniel Marsh as they engage in an intense competition for prestige and discoveries in the western United States. Along the way, the scientists interact with historical figures of the Gilded Age, including P. T. Barnum and Ulysses S. Grant. Ottaviani grew interested in the time period after reading a book about the Bone Wars. Finding Cope and Marsh unlikeable and the historical account dry, he decided to fictionalize events to service a better story. Ottaviani placed the artist Charles R. Knight into the narrative as a relatable character for audiences. The novel was the first work of historical fiction Ottaviani had written; previously he had taken no creative license with the characters depicted. Upon release, the novel generally received praise from critics for its exceptional historical content, and was used in schools as an educational tool.
Read more or edit on Wikipedia