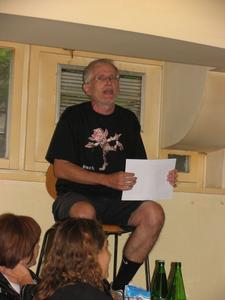 Branko Gradišnik (born 7 January 1951) is a Slovene writer and translator. He writes short stories and is a well-known columnist that writes for the newspaper Delo and other Slovene publications. In 2004 he was a candidate for mayor of Ljubljana.Branko Gradišnik was born in Ljubljana in 1951 and is the son of author and translator Janez Gradišnik. He received a bachelor's degree in art history and sociology from the University of Ljubljana and holds a master's degree in creative writing from Lancaster University. In 1982 he won the Prešeren Foundation Award for his collection of predominantly science fiction short stories titled Zemlja, zemlja, zemlja (Earth, Earth, Earth). He is also known for his translation of The Lord of the Rings trilogy into Slovene.
Read more or edit on Wikipedia