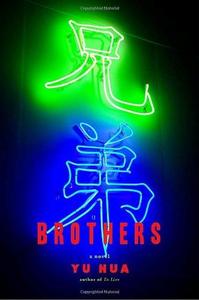 Brothers (simplified Chinese: 兄弟; pinyin: Xiōngdì) is the longest novel written by the Chinese novelist Yu Hua, in total of 76 chapters, separately published in 2005 for the part 1 (of the first 26 chapters) and in 2006 for part 2 (of the rest 50 chapters) by Shanghai Literature and Art Publishing House. It has over 180 thousand characters in Chinese, more than the 100 thousand characters that were originally planned for the book. It intertwines tragedy and comedy, and Yu Hua himself admits that the novel is personally his favorite literary work. Brothers has experienced great success with nearly 1 million copies sold in China. While reception among Chinese critics was generally negative, the novel was shortlisted for the Man Asian Literary Prize and awarded France's Prix Courrier International in 2008. It was translated into English by Eileen Cheng-yin Chow and Carlos Rojas in 2009.The story of the novel revolves around the step-brotherhood between Baldy Li and Song Gang who are the protagonists. Their life that has been of absurd and tragedy throughout China's history from the 1960s to the early period of Chinese Economic Reform serves for the main plot. The division of the novel into two parts is contextually on the basis of the death of Li Lan who is the biological mother of Baldy Li and the step-mother of Song Gang. The first part mainly focuses on their life of childhood, especially during the Cultural Revolution period with the collapse of their reorganized family and the tragedy of Song Fanping who is the biological father of Song Gang and the Step-father of Baldy Li. The second part mainly focuses on their life of adulthood with different living trajectories, especially during the early period of Chinese Economic Reform that is of the mixture of absurd and tragedy.
Read more or edit on Wikipedia