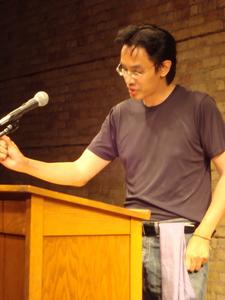 Bryan Thao Worra (born January 1, 1973) is a Laotian American writer. His books include On The Other Side Of The Eye, Touching Detonations, Winter Ink, Barrow and The Tuk Tuk Diaries: My Dinner With Cluster Bombs. He is the first Laotian American to receive a Fellowship in Literature from the United States government's National Endowment for the Arts. He received the Asian Pacific Leadership Award from the State Council on Asian Pacific Minnesotans for Leadership in the Arts in 2009. He received the Science Fiction Poetry Association Elgin Award for Book of the Year in 2014. He was selected as a Cultural Olympian representing Laos during the 2012 London Summer Olympics. He is the first Asian American president of the international Science Fiction and Fantasy Poetry Association, and the first Laotian American member of the professional Horror Writers Association.
Read more or edit on Wikipedia

A book of poems by Bryan Thao Worra.

The grass (a poem)

On the other side of the eye : poems