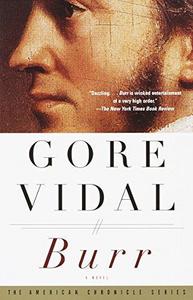 Burr is a 1973 historical novel by Gore Vidal that challenges the traditional Founding Fathers iconography of United States history, by means of a narrative that includes a fictional memoir by Aaron Burr, in representing the people, politics, and events of the U.S. in the early 19th century. It was a finalist for the National Book Award in 1974. Burr is chronologically the first book of the seven-novel series Narratives of Empire, with which Vidal examined, explored, and explained the imperial history of the United States; chronologically, the six other historical novels of the series are Lincoln (1984), 1876 (1976), Empire (1987), Hollywood (1990), Washington, D.C. (1967), and The Golden Age (2000).
Read more or edit on Wikipedia