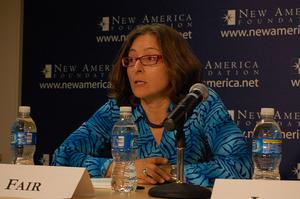 Carol Christine Fair (born 1968) is an American political scientist. She is an associate professor in the Security Studies Program within the Edmund A. Walsh School of Foreign Service at Georgetown University. Her work is primarily focused on counter-terrorism and South Asian topics.
Read more or edit on Wikipedia