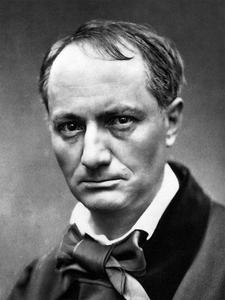 Charles Pierre Baudelaire (UK: , US: ; French: [ʃaʁl(ə) bodlɛʁ] (listen); 9 April 1821 – 31 August 1867) was a French poet who also produced notable work as an essayist and art critic. His poems exhibit mastery in the handling of rhyme and rhythm, contain an exoticism inherited from Romantics, but are based on observations of real life.His most famous work, a book of lyric poetry titled Les Fleurs du mal (The Flowers of Evil), expresses the changing nature of beauty in the rapidly industrializing Paris during the mid-19th century. Baudelaire's highly original style of prose-poetry influenced a whole generation of poets including Paul Verlaine, Arthur Rimbaud and Stéphane Mallarmé, among many others. He is credited with coining the term modernity (modernité) to designate the fleeting, ephemeral experience of life in an urban metropolis, and the responsibility of artistic expression to capture that experience. Furthermore, Marshall Berman has credited Baudelaire as being the first Modernist.
Read more or edit on Wikipedia