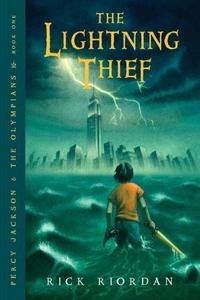 The Lightning Thief is a 2005 American fantasy-adventure novel based on Greek mythology, the first young adult novel written by Rick Riordan in the Percy Jackson & the Olympians series. It won the Adult Library Services Association Best Books for Young Adults, among other awards. It was adapted into a film named Percy Jackson & the Olympians: The Lightning Thief released in the United States on February 12, 2010. On May 14, 2020, Riordan announced that a live-action TV series for Disney+ would adapt the Percy Jackson & the Olympians series, with the first season covering The Lightning Thief. The novel is followed by The Sea of Monsters and spawned two sequel series (The Heroes of Olympus and The Trials of Apollo) and the extended universe of the Camp Half-Blood Chronicles.
Read more or edit on Wikipedia