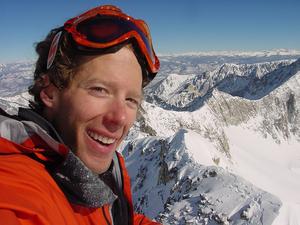 Aron Lee Ralston (born October 27, 1975) is an American outdoorsman, mechanical engineer and motivational speaker known for surviving a canyoneering accident by cutting off part of his right arm. On April 26, 2003, during a solo descent of Bluejohn Canyon in southeastern Utah, he dislodged a boulder, pinning his right wrist to the side of the canyon wall. After five days, he had to break his forearm in order to amputate with a dull pocketknife to break free, make his way through the rest of the canyon, rappel down a 65-foot (20 m) drop, and hike 7 miles (11 km) to safety.The incident is documented in Ralston's autobiography Between a Rock and a Hard Place and is the subject of the 2010 film 127 Hours where he is portrayed by James Franco. After the accident he continued mountaineering and became the first person to ascend all of Colorado's fourteeners solo in winter.
Read more or edit on Wikipedia