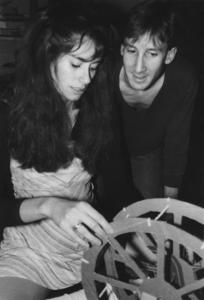 Lanford Wilson (April 13, 1937 – March 24, 2011) was an American playwright. His work, as described by The New York Times, was "earthy, realist, greatly admired [and] widely performed." Wilson helped to advance the Off-Off-Broadway theater movement with his earliest plays, which were first produced at the Caffe Cino beginning in 1964. He was one of the first playwrights to move from Off-Off-Broadway to Off-Broadway, then Broadway and beyond. He received the Pulitzer Prize for Drama in 1980 and was elected in 2001 to the Theater Hall of Fame. In 2004, Wilson was elected to the American Academy of Arts and Letters and received the PEN/Laura Pels International Foundation for Theater Award as a Master American Dramatist. He was nominated for three Tony Awards and has won a Drama Desk Award and five Obie Awards. Wilson's 1964 short play The Madness of Lady Bright was his first major success and led to further works throughout the 1960s that expressed a variety of social and romantic themes. In 1969, he co-founded the Circle Repertory Company with theatre director Marshall W. Mason. He wrote many plays for the Circle Repertory in the 1970s. His 1973 play The Hot l Baltimore was the company's first major success with both audiences and critics. The Off-Broadway production exceeded 1,000 performances. His play Fifth of July was first produced at Circle Repertory in 1978. He received a Tony Award nomination for its Broadway production, which opened in 1980. A prequel to Fifth of July called Talley's Folly (opened 1979 at Circle Repertory) opened on Broadway before Fifth of July and won Wilson the 1980 Pulitzer Prize for Drama and his first Tony nomination. Burn This (1987) was another Broadway success. Wilson also wrote the libretti for several operas.
Read more or edit on Wikipedia