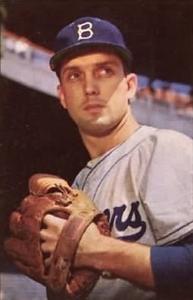 Carl Daniel Erskine (born December 13, 1926) is a former right-handed starting pitcher in Major League Baseball who played his entire career for the Brooklyn and Los Angeles Dodgers from 1948 through 1959. He was a pitching mainstay on Dodger teams which won five National League pennants, peaking with a 1953 season in which he won 20 games and set a World Series record with 14 strikeouts in a single game. Erskine pitched two of the NL's seven no-hitters during the 1950s. Following his baseball career, he was active as a business executive and an author.
Read more or edit on Wikipedia