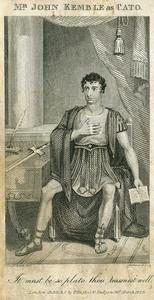 Cato, a Tragedy is a play written by Joseph Addison in 1712 and first performed on 14 April 1713. It is based on the events of the last days of Marcus Porcius Cato Uticensis (better known as Cato the Younger) (95–46 BC), a Stoic whose deeds, rhetoric and resistance to the tyranny of Julius Caesar made him an icon of republicanism, virtue, and liberty. Addison's play deals with many themes such as individual liberty versus government tyranny, republicanism versus monarchism, logic versus emotion, and Cato's personal struggle to hold to his beliefs in the face of death. The play has a prologue written by Alexander Pope and an epilogue by Samuel Garth. Premiering at the Theatre Royal, Drury Lane the original cast featured Barton Booth as Cato, Theophilus Keene as Lucius, John Mills as Sempronius, Robert Wilks as Juba, Colley Cibber as Syphax, George Powell as Portius, Lacy Ryan as Marcus, John Bowman as Decius, Anne Oldfield as Marcia and Mary Porter as Lucia. The play was a success throughout England and its possessions in the New World as well as Ireland. Frederick, Prince of Wales put on a production at Leicester House on 4 January 1749 to promote his own support for English liberty against the supposed tyranny of his father, George II of Great Britain. The cast featured four of Frederick's children, including the future George III, who spoke a specially-written prologue, which included the line "What, tho' a boy? it may with pride be said / A boy in England born, in England bred" to contrast to George II's German birthplace.The play continued to grow in popularity, especially in the American colonies, for several generations. Indeed, it was almost certainly a literary inspiration for the American Revolution, being well known to many of the Founding Fathers. In fact, George Washington allegedly had it performed for the Continental Army while it was encamped at Valley Forge, but the source is a letter of questionable authenticity.
Read more or edit on Wikipedia

original title: Cato. A tragedy. As it is acted at the Theatre-Royal in Drury-Lane
date of publication: 1700 or 1713 or 1721 or 1733
genre: tragedy
main subject: Cato the Younger
archive.org/stream/catotragedy00addi#page/n7/mode/2up