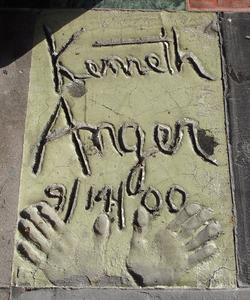 Kenneth Anger (born Kenneth Wilbur Anglemyer, February 3, 1927) is an American underground experimental filmmaker, actor, and author. Working exclusively in short films, he has produced almost forty works since 1937, nine of which have been grouped together as the "Magick Lantern Cycle". His films variously merge surrealism with homoeroticism and the occult, and have been described as containing "elements of erotica, documentary, psychodrama, and spectacle". Anger himself has been described as "one of America's first openly gay filmmakers, and certainly the first whose work addressed homosexuality in an undisguised, self-implicating manner", and his "role in rendering gay culture visible within American cinema, commercial or otherwise, is impossible to overestimate", with several being released prior to the legalization of homosexual acts between consenting adults in the United States. He has also focused upon occult themes in many of his films, being fascinated by the English gnostic mage and poet Aleister Crowley, and is an adherent of Thelema, the religion Crowley founded. Born to a middle-class Christian Presbyterian family in Santa Monica, California, Anger would later claim to have been a child actor who appeared in the film A Midsummer Night's Dream (1935); the accuracy of this claim has come under dispute. He began making short films when he was ten years old, although his first film to gain any recognition, the homoerotic Fireworks (1947), would only be produced a decade later. The controversial nature of the work led to him being put on trial on obscenity charges, but he was acquitted. A friendship and working relationship began subsequently with pioneering sexologist Alfred Kinsey. Moving to Europe, Anger produced a number of other shorts inspired by the artistic avant-garde scene on the continent, such as Rabbit's Moon (released 1971) and Eaux d'Artifice (1953). Returning to the United States in 1953, he set about working on several new projects, including the films Inauguration of the Pleasure Dome (1954), Scorpio Rising (1964), Kustom Kar Kommandos (1965), and the gossip book Hollywood Babylon (1965). The latter would become infamous for various dubious and sensationalist claims, many of which were later disproven, though some do remain as urban legends. Getting to know several notable countercultural figures of the time, including Tennessee Williams, Mick Jagger, Keith Richards, Jimmy Page, Marianne Faithfull and Anton LaVey, Anger involved them in his subsequent Thelemite-themed works, Invocation of My Demon Brother (1969) and Lucifer Rising (1972). Following his failure to produce a sequel to Lucifer Rising, which he attempted through the mid-1980s, Anger retired from filmmaking, instead focusing on Hollywood Babylon II (1984). At the dawn of the 21st century he once more returned to filmmaking, producing shorts for various film festivals and events. Anger has described filmmakers such as Auguste and Louis Lumière, Georges Méliès, and Maya Deren as influences, and has been cited as an important influence on later film directors like Martin Scorsese, David Lynch and John Waters. He has also been described as having "a profound impact on the work of many other filmmakers and artists, as well as on music video as an emergent art form using dream sequence, dance, fantasy, and narrative".
Read more or edit on Wikipedia