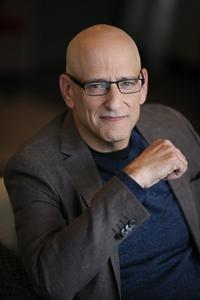 Andrew Klavan (; born July 13, 1954) is an American writer of crime and suspense novels. Klavan has been nominated for the Edgar Award five times and has won twice. Klavan has also worked in film and as an essayist and video satirist. He hosts "The Andrew Klavan Show" podcast on the conservative site The Daily Wire, a media company associated with Ben Shapiro. He is also known as a conservative commentator.
Read more or edit on Wikipedia