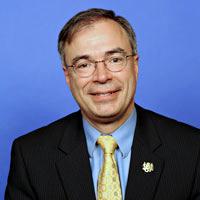 Andrew Peter Harris (born January 25, 1957) is an American politician and physician who has been the U.S. Representative for Maryland's 1st congressional district since 2011. The district includes the entire Eastern Shore, as well as several eastern exurbs of Baltimore. He is currently the only Republican member of Maryland's congressional delegation. Harris previously served in the Maryland Senate.
Read more or edit on Wikipedia