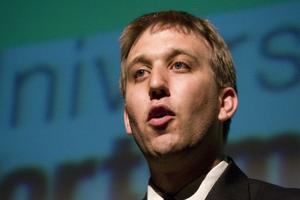 Christopher John Lintott (born 26 November 1980) is a British astrophysicist, author and broadcaster. He is a Professor of Astrophysics in the Department of Physics at the University of Oxford. Lintott is involved in a number of popular science projects aimed at bringing astronomy to a wider audience and is also the primary presenter of the BBC television series The Sky at Night, having previously been co-presenter with Patrick Moore until Moore's death in 2012. He co-authored Bang! – The Complete History of the Universe and The Cosmic Tourist with Moore and Queen guitarist and astrophysicist Brian May.
Read more or edit on Wikipedia