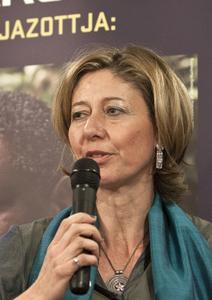 Christina Lamb OBE (born 15 May 1965) is a British journalist and author. She is the chief foreign correspondent for The Sunday Times. Lamb has won sixteen major awards including four British Press Awards and the European Prix Bayeux-Calvados for war correspondents. She is an Honorary Fellow of University College, Oxford, a Fellow of the Royal Geographical Society and a Global Fellow for the Wilson Centre for International Affairs in Washington D.C. In 2013 she was appointed an OBE by the Queen for services to journalism. In November 2018 Lamb received an honorary degree of Doctor of Laws from the University of Dundee.She has written ten books including the bestselling The Africa House and I Am Malala, co-written with Malala Yousafzai, which was named Popular Non-Fiction Book of the Year in the British National Book Awards 2013.
Read more or edit on Wikipedia