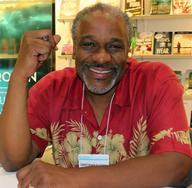 Christopher Paul Curtis (born May 10, 1953) is an American children's book author. His first novel, The Watsons Go to Birmingham – 1963, was published in 1995 and brought him immediate national recognition, receiving the Coretta Scott King Honor Book Award and the Newbery Honor Book Award in addition to numerous other awards. In 2000, he became the first person to win both the Newbery Medal and the Coretta Scott King Award—prizes received for his second novel Bud, Not Buddy—and the first African-American man to win the Newbery Medal. His novel The Watsons Go to Birmingham – 1963 was made into a television film in 2013. Curtis has written a total of eight novels and has penned introductions to several prominent books in addition to contributing articles to several newspapers and magazines. Following the success of his first two novels, he founded the Nobody but Curtis Foundation in an effort to improve literacy levels amongst children and young adults in North America and Africa. Born and raised in Flint, Michigan, Curtis worked as an autoworker for General Motors for thirteen years following his high school graduation. During this time, he attended the University of Michigan-Flint as a part-time student, ultimately receiving his degree in 2000. Curtis is praised for his storytelling ability and his use of humor to discuss more serious topics of racism, poverty, and child abuse. His ability to authentically portray the experiences of children and share history in a way that encourages readers to learn more has made him a widely-taught author in elementary and middle schools. Source: Wikipedia (en)