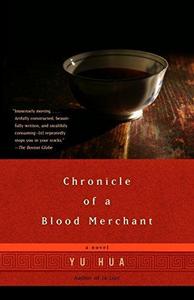 Chronicle of a Blood Merchant

Chronicle of a Blood Merchant (simplified Chinese: 许三观卖血记; traditional Chinese: 許三觀賣血記; pinyin: Xǔ Sānguān Mài Xuě Jì) is a 1995 novel composed by Chinese writer Yu Hua. It is his third published novel after Cries in the Drizzle and To Live. It is the story of a silk factory worker, Xu Sanguan, who sells his blood over the years, in most cases in an attempt to improve the lives of himself and his family members, and overcome family difficulties. The story is set in the late 1940s until the 1980s, from the early years of the People's Republic of China until after the Cultural Revolution. The story begins with Xu Sanguan’s visit to his grandpa, when he first knew about selling blood. His first time to sell blood is to prove his body is in good health. After discovering that selling blood can quickly get him a lot of cash, he begins to sell blood constantly when he and his family struggle with life difficulties. By the end of the story, Xu Sanguan’s family no longer lacks cash, and he thus no longer needs to sell blood to support his family. The space of “folk” in the novel is neatly built by the extensive use of repetitions and dialogues, which highlights the nature of Chinese peasants and the social scenario of the era. The novel holds elements of black humor—a characteristic that Yu Hua typically applies in his other novels such as To Live. Yu Hua's style of using humor to highlight contemporary socio-political issues in China has been compared to the modern visual art movement of 'Cynical Realism'.The book received rave reviews from critics and an English translation by Andrew F. Jones was released in 2003. The title has also been translated as The Chronicle of Xu Sanguan’s Blood Selling, Xu Sanguan’s Records of Selling Blood and The Tale of Xu Sanguan Selling Blood. The translator stated that this novel is "a work of literary imagination and social critique."
Read more or edit on Wikipedia