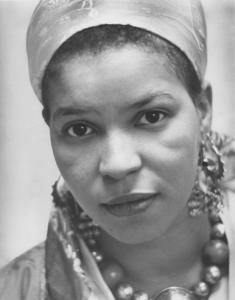 Ntozake Shange ( EN-toh-ZAH-kee SHAHNG-gay; October 18, 1948 – October 27, 2018) was an American playwright and poet. As a Black feminist, she addressed issues relating to race and Black power in much of her work. She is best known for her Obie Award-winning play, For Colored Girls Who Have Considered Suicide / When the Rainbow Is Enuf. She also penned novels including Sassafrass, Cypress & Indigo (1982), Liliane (1994), and Betsey Brown (1985), about an African-American girl runaway from home. Among Shange's honors and awards were fellowships from the Guggenheim Foundation and Lila Wallace Reader's Digest Fund, a Shelley Memorial Award from the Poetry Society of America, and a Pushcart Prize. In April 2016, Barnard College announced that it had acquired Shange's archive. She lived in Brooklyn, New York. Shange had one daughter, Savannah Shange. Shange was married twice: to the saxophonist David Murray and the painter McArthur Binion, Savannah's father, with both marriages ending in divorce.
Read more or edit on Wikipedia