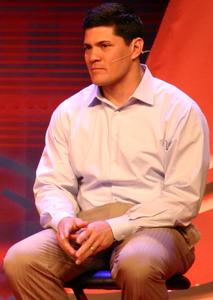 Tedy Lacap Bruschi (; born June 9, 1973) is a former professional American football player who was a linebacker in the National Football League (NFL) for 13 seasons, who currently serves as the senior advisor to the head coach at University of Arizona. He played college football for the University of Arizona, and was a two-time consensus All-American. He was drafted by the New England Patriots in the third round of the 1996 NFL Draft, and played his entire professional career with the Patriots. Bruschi won three Super Bowls and was a two-time All-Pro selection.
Read more or edit on Wikipedia

Never Give Up: My Stroke, My Recovery, and My Return to the NFL