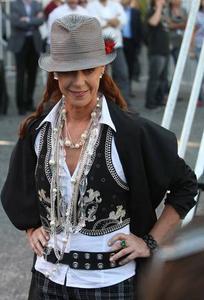 Claudia del Carmen Di Girolamo Quesney (born December 30, 1956 in Santiago de Chile), is a Chilean actress and theater director of Italian descent, who has a prominent and distinguished artistic career in theater, film and television. Considered one of the best actress of the performing arts in the history of Chilean television. In the 1990s, with the return of democracy in his country, she began the most successful period of his career, leading the first super-productions in the history of Chilean television, in the midst of Golden Age of television series, between the 1990s and 2000s, with titles such as Trampas y Caretas (1992), Estupido Cupido (1995), Oro Verde (1997), Iorana (1998), La Fiera (1999), Romané (2000), Pampa Ilusión (2001), El circo de las Montini (2002), Puertas Adentro (2003), and Los Pincheira (2004). She was married to fellow actor Cristián Campos. Her current spouse since 1996 is telenovela director, and a TVN executive, Vicente Sabatini.
Read more or edit on Wikipedia