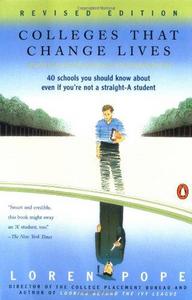 Colleges That Change Lives is a college educational guide originally put together by longtime student advocate and former New York Times education editor Loren Pope. It was first published in 1996, with a second edition in 2000, a third edition in 2006 and a fourth edition in 2013. It addresses college admissions in the United States. The third edition profiles 40 choices for liberal arts colleges that, according to Pope, offer as much, if not more, than Ivy League schools: "The phrase 'Ivy League education' is an oxymoron when compared to the benefactions to mind and soul the colleges in this book bestow. Not only are they better, but they want you, and you will love them for making a new and better you. Your satisfaction will be lifelong."
Read more or edit on Wikipedia

Dangerous Garden: The Quest for Plants to Change Our Lives

Human wildlife that lives on us