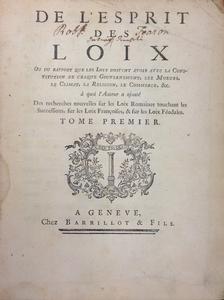 The Spirit of the Laws

The Spirit of Laws (French: De l'esprit des lois, originally spelled De l'esprit des loix) is a treatise on political theory, as well as a pioneering work in comparative law, published in 1748 by Charles de Secondat, Baron de Montesquieu. Originally published anonymously, partly because Montesquieu's works were subject to censorship, its influence outside France was aided by its rapid translation into other languages. In 1750 Thomas Nugent published the first English translation. In 1751 the Roman Catholic Church added De l'esprit des lois to its Index Librorum Prohibitorum ("List of Prohibited Books"). Yet Montesquieu's treatise had an enormous influence on the work of many others, most notably: Catherine the Great, who produced Nakaz (Instruction); the Founding Fathers of the United States Constitution; and Alexis de Tocqueville, who applied Montesquieu's methods to a study of American society, in Democracy in America. Macaulay referenced Montesquieu's continuing importance when he wrote in his 1827 essay entitled "Machiavelli" that "Montesquieu enjoys, perhaps, a wider celebrity than any political writer of modern Europe." Montesquieu spent around twenty-one years researching and writing De l'esprit des lois, covering a huge range of topics including law, social life and the study of anthropology, and providing more than 3,000 commendations. In this treatise Montesquieu argued that political institutions needed, for their success, to reflect the social and geographical aspects of the particular community. He pleaded for a constitutional system of government with separation of powers, the preservation of legality and civil liberties, and the end of slavery.
Read more or edit on Wikipedia