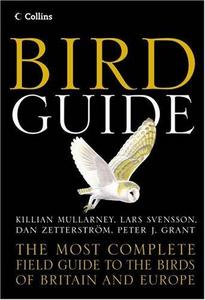 The Collins Bird Guide is a field guide to the birds of the Western Palearctic. Its authors are Lars Svensson, Killian Mullarney, Dan Zetterström and Peter J. Grant, and it is illustrated by Killian Mullarney and Dan Zetterström (with two plates of North American passerines contributed by Larry McQueen). It has been described as "undoubtedly the finest field guide that has ever been produced", and "the last great bird book of the 20th century".It was originally published in Swedish and Danish in 1999, and in English in hardback in the same year, and later in paperback. A large-format English edition has also been produced, as has a German and Dutch edition. The first edition was translated to 14 European languages, including Spanish, Portuguese, French, Dutch and German. A second edition, revised and enlarged, was published in January 2010. A series of updates and corrections were made in 2015, with no change to the edition number.The cover of the first edition, in all formats, depicts a barn owl. On the second edition, this was replaced by an arctic tern. Eleven pages of introductory material are followed by the book's main content: 366 pages of text and colour paintings. The text for each species gives brief status notes, followed by a section detailing identification, and concludes with a section on voice. Accompanying most species accounts is a small colour map showing breeding, wintering and migrant range. The guide is also available as a paid-for app, for iPhone and Android devices. The app includes all of the text and images from the print edition, as well as audio recordings. Additional data can be bought separately; the first such package being a set of distribution maps for 271 species, from the British Trust for Ornithology's Bird Atlas 2007–11.All versions cover Europe, North Atlantic islands, much of North Africa and the Middle East. Most of the species covered in the main part of the guide are regular breeding, wintering or migrant species in its area of coverage, although some vagrants are also included. There are additional sections giving brief accounts of (a) vagrants and (b) introduced breeding species and species recorded only as escapes.
Read more or edit on Wikipedia