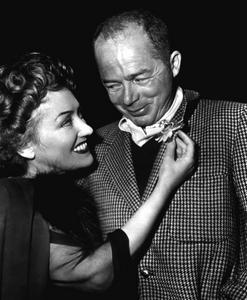 Billy Wilder (; German: [ˈvɪldɐ]; born Samuel Wilder; June 22, 1906 – March 27, 2002) was an Austrian-American film director, producer and screenwriter. His career in Hollywood spanned five decades, and he is regarded as one of the most brilliant and versatile filmmakers of Classical Hollywood cinema. He became a screenwriter while living in Berlin. After the rise of the Nazi Party, he moved to Paris, due to rampant antisemitism and discrimination against the Jewish people. He moved to Hollywood in 1933, and had a major hit when he wrote the screenplay with Charles Brackett and Walter Reisch for the Academy Award nominated film Ninotchka (1939). Wilder established his directorial reputation with an adaptation of James M. Cain's Double Indemnity (1944), a film noir. Wilder co-wrote the screenplay with crime novelist Raymond Chandler. Wilder earned the Best Director and Best Screenplay Academy Awards for the adaptation of a Charles R. Jackson story, The Lost Weekend (1945). In the 1950s, Wilder directed a string of critically acclaimed films, including the Hollywood drama film Sunset Boulevard (1950), the noir film Ace in the Hole (1951), Stalag 17 (1953), and Sabrina (1954). Wilder directed three films in 1957, including The Spirit of St. Louis, Love in the Afternoon and Witness for the Prosecution. Wilder collaborated with Marilyn Monroe on a few films, including The Seven Year Itch (1955) and Some Like It Hot (1959).In the 1960s, Wilder directed the romance film The Apartment (1960), which received a critical and commercial success. It won the Academy Award for Best Picture, with Wilder becoming the first person to win Academy Awards as producer, director and screenwriter. Toward the end of his career, Wilder directed a few comedy films, starring Lemmon and Walter Matthau. Other films including One, Two, Three (1961), Irma la Douce (1963), The Fortune Cookie (1966), Avanti! (1972), The Front Page (1974) and Buddy Buddy (1981). Over his film career, Wilder directed fourteen actors in Oscar-nominated performances. Wilder has received various honours over his distinguished career including the American Film Institute Life Achievement Award in 1986, the Irving G. Thalberg Memorial Award in 1988, the Kennedy Center Honors in 1990, and the National Medal of Arts in 1993. He also received the British Academy Film Award Fellowship Award, the Directors Guild of America's Lifetime Achievement Award, the Laurel Award for Screenwriting Achievement, and the Producers Guild of America's Lifetime Achievement Award. Double Indemnity, Sunset Boulevard, Some Like It Hot, and The Apartment are included in the AFI's greatest American films of all time. As of 2019, 10 of his films are preserved in the United States National Film Registry of the Library of Congress as being "culturally, historically or aesthetically significant".
Read more or edit on Wikipedia