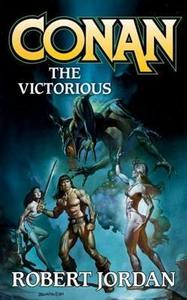 Conan the Victorious is a fantasy novel by American writer Robert Jordan, featuring Robert E. Howard's sword and sorcery hero Conan the Barbarian. It was first published in trade paperback by Tor Books in November 1984; a regular paperback edition followed from the same publisher in December 1985, and was reprinted in March 1991 and August 2010. The first British edition was published in paperback by Sphere Books in April 1987. The novel was later gathered together with Conan the Magnificent and Conan the Triumphant into the hardcover omnibus collection The Further Chronicles of Conan (Tor Books, October 1999).
Read more or edit on Wikipedia