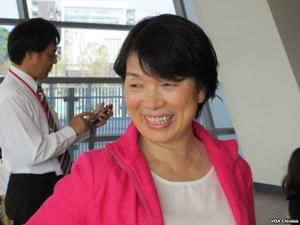 Lung Ying-tai (Chinese: 龍應台; pinyin: Lóng Yìngtái; born 13 February 1952 in Kaohsiung) is a Taiwanese essayist and cultural critic. She occasionally writes under the pen name 'Hu Meili' (胡美麗; 胡美丽; Hú Měilì). Lung's poignant and critical essays contributed to the democratization of Taiwan and as the only Taiwanese writer with a column in major mainland Chinese newspapers, she is a writer in Mainland China. Described as a "public intellectual of the Chinese-speaking world", she spent 20 years based outside Taiwan in the US and Germany where became widely known for her criticism of the Kuomintang's martial law regime. She has since become a critic of Mainland China's increasing restrictions on press freedom and civil liberties. She has written more than 30 books.Lung Ying-tai has held two positions within Taiwan's government as Taipei's first Cultural Bureau Chief (1999–2003) and as Taiwan's first Culture Minister (2012–2014).
Read more or edit on Wikipedia