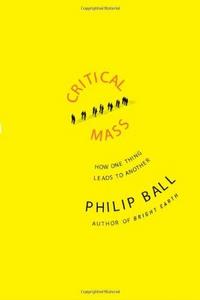 Critical Mass: How One Thing Leads to Another is a non-fiction book by English chemist and physicist Philip Ball, originally published in 2004, discusses the concept of a “physics of society”. Ball examines past thinkers, such as Thomas Hobbes, Lewis Mumford, Emyr Hughes, and Gottfried Achenwall, who have attempted to apply (or argue against) the use of physics, chemistry, or mathematics in the study of mass social phenomena. He also discusses how the concept relates to recent research, including his own. Critical Mass was the winner of the 2005 Aventis Prize for Science Books.
Read more or edit on Wikipedia

original title: Critical Mass: How One Thing Leads to Another
date of publication: 2004
main subject: science