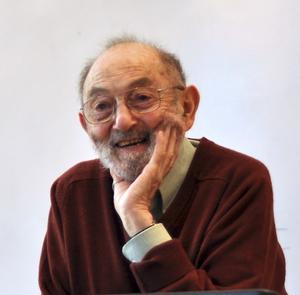 Morris Halle (; July 23, 1923 – April 2, 2018) was a Latvian-born Jewish American linguist who was an Institute Professor, and later professor emeritus, of linguistics at the Massachusetts Institute of Technology. The father of "modern phonology", he was best known for his pioneering work in generative phonology, having written "On Accent and Juncture in English" in 1956 with Noam Chomsky and Fred Lukoff and The Sound Pattern of English in 1968 with Chomsky. He also co-authored (with Samuel Jay Keyser) the earliest theory of generative metrics.
Read more or edit on Wikipedia

The Sound Pattern of English