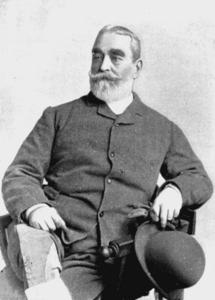 Sir Francis Cowley Burnand (29 November 1836 – 21 April 1917), usually known as F. C. Burnand, was an English comic writer and prolific playwright, best known today as the librettist of Arthur Sullivan's opera Cox and Box. The son of a prosperous family, he was educated at Eton and Cambridge and was expected to follow a conventional career in the law or in the church, but he concluded that his vocation was the theatre. From his schooldays he had written comic plays, and from 1860 until the end of the 19th century, he produced a series of more than 200 Victorian burlesques, farces, pantomimes and other stage works. His early successes included the burlesques Ixion, or the Man at the Wheel (1863) and The Latest Edition of Black-Eyed Susan; or, the Little Bill that Was Taken Up (1866). Also in 1866, he adapted the popular farce Box and Cox as a comic opera, Cox and Box, with music by Sullivan. The piece became a popular favourite and was later frequently used by the D'Oyly Carte Opera Company as a curtain raiser; it remains regularly performed today. By the 1870s, Burnand was generating a prodigious output of plays as well as comic pieces and illustrations for the humour magazine Punch. Among his 55-stage works during the decade was another frequently revived hit, Betsy (1879). For Punch, among other things, he wrote the popular column "Happy Thoughts", in which the narrator recorded the difficulties and distractions of everyday life. Also admired were his burlesques of other writers' works. Burnand was a contributor to Punch for 45 years and its editor from 1880 until 1906 and is credited with adding much to the popularity and prosperity of the magazine. His editorship of the original publication of The Diary of a Nobody by the brothers George and Weedon Grossmith was a high point of his tenure in 1888–89. Many of his articles were collected and published in book form. His stage successes in the 1890s included his English-language versions of two Edmond Audran operettas, titled La Cigale and Miss Decima (both in 1891). His last works included collaborations on pantomimes of Cinderella (1905) and Aladdin (1909). Known generally for his genial wit and good humour, Burnand was nevertheless intensely envious of his contemporary W. S. Gilbert but was unable to emulate his rival's success as a comic opera librettist. In other forms of theatre Burnand was outstandingly successful, with his works receiving London runs of up to 550 performances and extensive tours in the British provinces and the US. He published several humorous books and memoirs and was knighted in 1902 for his work on Punch.
Read more or edit on Wikipedia