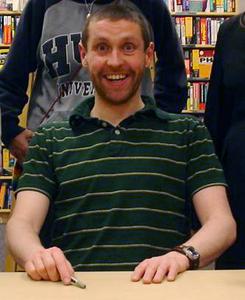 David James Gorman (born 2 March 1971) is an English comedian, presenter, and writer. Gorman began his career writing for comedy series such as The Mrs Merton Show (1993–1998) and The Fast Show (1994–1997), and later garnered acclaim for his stand-up shows, one of which earned him a nomination for a Perrier Award. He became widely known for his Are You Dave Gorman? stage show, which he debuted at the 2000 Edinburgh Fringe Festival and of which the television adaptation was broadcast as The Dave Gorman Collection in 2001. Gorman followed Are You Dave Gorman? with several other stand-up shows or comedic concepts that were turned into television series, including Dave Gorman's Googlewhack Adventure (2003–2005), Genius (2009–2010), and Modern Life Is Goodish (2013–2017). He has also been a guest on other shows such as Have I Got News for You, Taskmaster, Go 8 Bit, They Think It's All Over, and QI.
Read more or edit on Wikipedia