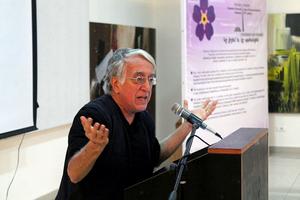 David Barsamian (born 1945) is an Armenian-American radio broadcaster, writer, and the founder and director of Alternative Radio, a Boulder, Colorado-based syndicated weekly public affairs program heard on some 250 radio stations worldwide.Barsamian started working in radio in 1978 at KGNU in Boulder, Colorado and then KRZA in Alamosa, Colorado.Articles by (and interviews with) Barsamian have appeared regularly in The Progressive, The Sunand Z Magazine. Barsamian also lectures on U.S. foreign policy, corporate control, the media, and propaganda. As a writer, Barsamian is best known for his series of interviews with Noam Chomsky, which have been published in book form and translated into many languages.
Read more or edit on Wikipedia