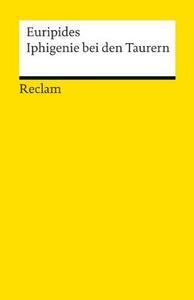 Iphigenia in Tauris (Ancient Greek: Ἰφιγένεια ἐν Ταύροις, Iphigeneia en Taurois) is a drama by the playwright Euripides, written between 414 BC and 412 BC. It has much in common with another of Euripides's plays, Helen, as well as the lost play Andromeda, and is often described as a romance, a melodrama, a tragi-comedy or an escape play.Although the play is generally known in English as Iphigenia in Tauris, this is, strictly speaking, the Latin title of the play (corresponding to the Greek Ἰφιγένεια ἐν Ταύροις), the meaning of which is Iphigenia among the Taurians. There is no such place as "Tauris" in Euripides' play, although Goethe, in his play Iphigenie auf Tauris (on which Gluck's opera Iphigénie en Tauride is based), ironically utilising this translation error, posits such a place. The name refers to the Crimean Peninsula (ancient Taurikḗ).
Read more or edit on Wikipedia