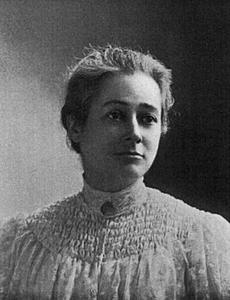 Florence Augusta Merriam Bailey (August 8, 1863 – September 22, 1948) was an American ornithologist and nature writer who has been referred to as the "First Lady of ornithology". She organized early Audubon Society chapters and was an activist for bird protection. She wrote extensively on birds for both a general and a scholarly audience. Her first published book Birds Through an Opera-Glass (1890) is considered the first bird field guide in the modern tradition. She followed it with other popular accounts. She carried out extensive field work throughout the American West, often in collaboration with her husband Vernon Bailey, who specialized in mammalogy. Her field work was documented in several books, chief among them the important field guide Handbook of Birds of the Western United States (1902) and "her most important contribution to the ornithological literature", The Birds of New Mexico (1928), for which she was awarded the Brewster Medal.
Read more or edit on Wikipedia