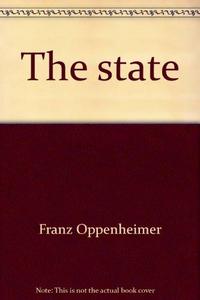 The State (German: Der Staat) is a book by German sociologist Franz Oppenheimer first published in Germany in 1908. Oppenheimer wrote the book in Frankfurt am Main during 1907, as a fragment of the four-volume System of Sociology, an intended interpretative framework for the understanding of social evolution on which he laboured from the 1890s until the end of his life. The work summarizes Oppenheimer's general theory on the origin, development and future transformation of the state. The State, which Oppenheimer's missionary zeal pervades, was widely read and passionately discussed in the early 20th century. It was well received by—and influential on—as diverse an audience as Israeli halutzim, American and Slavic communitarians, West German Chancellor Ludwig Erhard, and anarcho-capitalists like Murray Rothbard.A classical liberal and socialist sympathiser, Oppenheimer regarded capitalism as "a system of exploitation and capital revenues as the gain of that exploitation", but placed the blame not on the genuinely free market, but on the intervention of the state. Oppenheimer's view of the state is profoundly opposed to the then dominant characterisation propounded by G. W. F. Hegel of the state as an admirable achievement of modern civilisation. Proponents of this view tend to accept the social contract view that the State came about as every larger groups of people agreed to subordinate their private interests for the common good. In contrast, Opphenheimer's view was an advancement of the "conquest theory" of the state that developed during the late 19th century by Ludwig Gumplowicz. According to conquest theory, the state came into being through war and conquest, a consequence of which was the establishment of social classes; the dominant conquerors and the subordinate conquered. This, in turn, led to the emergence of a political system to consolidate the power of the conquerors, to perpetuate and regulate class divisions. Oppenheimer's views led the American essayist, Albert Jay Nock, writing in the first half of the 20th century, to remark that in his own book, Our Enemy, the State:
Read more or edit on Wikipedia