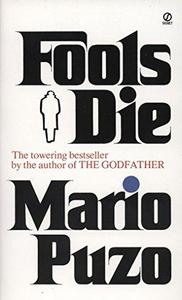 Fools Die is a 1978 novel by Italian-American author Mario Puzo. Played out in the worlds of gambling, publishing and the film industry, John Merlyn and his brother Artie Merlyn obey their own code of honor in the ferment of 1950's America, where law and organized crime are one and the same. Set in New York, Hollywood, and Las Vegas, Mario Puzo considered Fools Die to be his personal favorite. The protagonist, John Merlyn, is mostly based on Mario Puzo himself. The paperback rights to the book were sold in 1978 by the publisher, G. P. Putnam's Sons, to New American Library for a then-record $2.55 million.
Read more or edit on Wikipedia