Dimitrije Bogdanović (Serbian: Димитрије Богдановић; October 11, 1930 in Belgrade – June 14, 1986 in Belgrade) was a Serbian historian and member of the Serbian Academy of Sciences and Arts. He is considered one of leading scholars on Serbian medieval literature. Bogdanović concentrated on the history of medieval Serbian principalities and history of the Serbian Orthodox Church during the Middle Ages. In 1978 Bogdanović became corresponding member of the Serbian Academy, in 1985 regular member.
Read more or edit on Wikipedia 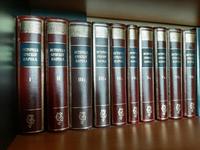