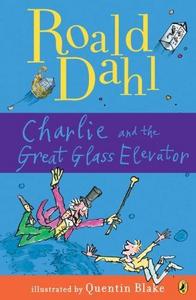 Charlie and the Great Glass Elevator

Charlie and the Great Glass Elevator is a children's book by British author Roald Dahl. It is the sequel to Charlie and the Chocolate Factory, continuing the story of young Charlie Bucket and chocolatier Willy Wonka as they travel in the Great Glass Elevator. The book was first published in the United States by Alfred A. Knopf, Inc. in 1972, and in the United Kingdom by George Allen & Unwin in 1973. Although the original book has been filmed three times—for the big screen in 1971 and 2005, and as an animated direct-to-video-crossover with Tom and Jerry in 2017—The Great Glass Elevator has never been adapted on a visual medium; however it was adapted for audio by Puffin Audio Books starring Neil Answych as Charlie Bucket and Gordan Fairclough as Willy Wonka, and the second half of a BBC adaptation for Radio 4 in 1983. In addition, Netflix is working on making an animated series based on the novel to be directed by Taika Waititi. Dahl began writing a third book in the series, titled Charlie in the White House, but did not complete it.
Read more or edit on Wikipedia