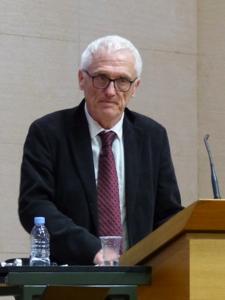 Jan Tomasz Gross (born 1947) is a Polish-American sociologist and historian. He is the Norman B. Tomlinson '16 and '48 Professor of War and Society, emeritus, and Professor of History, emeritus, at Princeton University.Gross is the author of several books on Polish history, particularly Polish-Jewish relations during World War II and the Holocaust, including Neighbors: The Destruction of the Jewish Community in Jedwabne, Poland (2001); Fear: Anti-Semitism in Poland after Auschwitz (2006); and (with Irena Grudzinska Gross) Golden Harvest (2012).
Read more or edit on Wikipedia