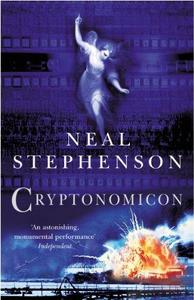 Cryptonomicon is a 1999 novel by American author Neal Stephenson, set in two different time periods. One group of characters are World War II-era Allied codebreakers and tactical-deception operatives affiliated with the Government Code and Cypher School at Bletchley Park (UK), and disillusioned Axis military and intelligence figures. The second narrative is set in the late 1990s, with characters that are (in part) descendants of those of the earlier time period, who employ cryptologic, telecom, and computer technology to build an underground data haven in the fictional Sultanate of Kinakuta. Their goal is to facilitate anonymous Internet banking using electronic money and (later) digital gold currency, with a long-term objective to distribute Holocaust Education and Avoidance Pod (HEAP) media for instructing genocide-target populations on defensive warfare.
Read more or edit on Wikipedia