Edward René David Goldsmith (8 November 1928 – 21 August 2009), widely known as Teddy Goldsmith, was an Anglo-French environmentalist, writer and philosopher. He was a member the prominent Goldsmith family. The eldest son of Major Frank Goldsmith, and elder brother of the financier James Goldsmith. Edward Goldsmith was the founding editor and publisher of The Ecologist. Known for his outspoken views opposing industrial society and economic development, he expressed a strong sympathy for the ways and values of traditional peoples. He co-authored the influential A Blueprint for Survival with Robert Allen, becoming a founding member of the political party "People" (later renamed the Green Party), itself largely inspired by the Blueprint. Goldsmith's more conservative view of environmentalism put him at odds with socialist currents of thought which came to dominate within the Green Party. A deep ecologist and systems theorist, Goldsmith was an early proponent of the Gaia hypothesis, having previously developed a similar cybernetic concept of a self-regulating biosphere. A talented after-dinner speaker and raconteur, Goldsmith was an articulate spokesman and campaigner, receiving a number of awards for his work protecting the natural world and highlighting the importance and plight of indigenous peoples, including an honorary Right Livelihood Award and the Chevalier de la Legion d'Honneur.
Read more or edit on Wikipedia 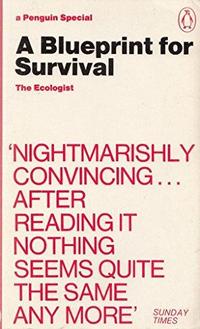