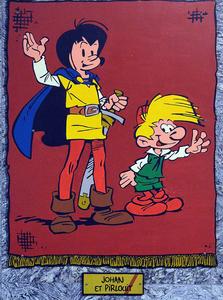 Johan and Peewit (French: Johan et Pirlouit) is a Belgian comics series created by Peyo. Since its initial appearance in 1947 it has been published in 13 albums that appeared before the death of Peyo in 1992. Thereafter, a team of comic book creators from Studio Peyo continued to publish the stories. The series is set in Medieval Europe and includes elements of sword-and-sorcery. Johan et Pirlouit provided the framework for the first appearances of The Smurfs.
Read more or edit on Wikipedia