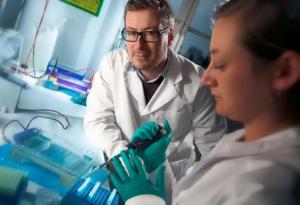 Eske Willerslev (born 5 June 1971) is a Danish evolutionary geneticist notable for his pioneering work in molecular anthropology, palaeontology, and ecology. He currently holds the Prince Philip Professorship in Ecology and Evolution at University of Cambridge, UK and the Lundbeck Foundation Professorship in Evolution at Copenhagen University, Denmark. He is director of the Centre of Excellence in GeoGenetics, a research associate at the Wellcome Trust Sanger Institute, and a professorial fellow at St John's College, Cambridge. Willerslev is a foreign associate of the National Academy of Sciences (US) and holds the Order of the Dannebrog issued by her Majesty Queen Margrethe II of Denmark in 2017.
Read more or edit on Wikipedia