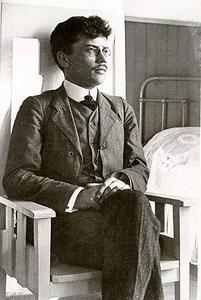 Friedebert Tuglas, born Friedebert Mihkelson or Michelson (2 March 1886 – 15 April 1971) was an Estonian writer and critic who introduced Impressionism and Symbolism to Estonian literature. Persecuted by the authorities in the beginning of 20th century, he later became an acknowledged representative of Estonian literature in the Soviet era.
Read more or edit on Wikipedia