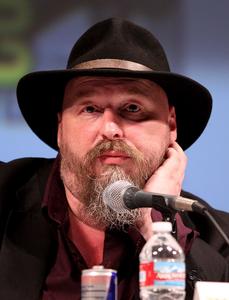 Warren Girard Ellis (born 16 February 1968) is a British comic book writer, novelist and screenwriter. He is best known as the co-creator of several original comics series, including Transmetropolitan (1997–2002), Global Frequency (2002–2004) and Red (2003–2004), which was adapted into the feature films Red (2010) and Red 2 (2013). Ellis is the author of the novels Crooked Little Vein (2007) and Gun Machine (2013) and the novella Normal (2016). A prolific comic book writer, Ellis has written several Marvel series, including Astonishing X-Men, Thunderbolts, Moon Knight and the "Extremis" story arc of Iron Man, which was the basis for the Marvel Cinematic Universe film Iron Man 3 (2013). Ellis created The Authority and Planetary for WildStorm, and wrote a run of Hellblazer for Vertigo and James Bond for Dynamite Entertainment. Ellis wrote the video games Hostile Waters (2001), Cold Winter (2005) and Dead Space (2008). He also wrote the animated TV movie G.I. Joe: Resolute (2009). Ellis is well known for sociocultural commentary, both through his online presence and through his writing, which covers transhumanist (most notably nanotechnology, cryonics, mind transfer and human enhancement) and folkloric themes, often in combination with each other. He is a humanist and former patron of Humanists UK, a charity focused on promoting humanism and advancing secularism. He is a resident of Southend-on-Sea, England.
Read more or edit on Wikipedia