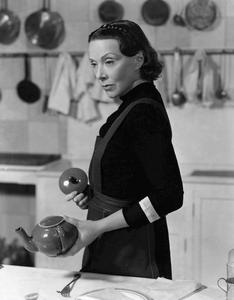 Eugenie Leontovich (Born Evgenia Konstantinovna Leontovich; Russian: Евге́ния Константиновна Леонто́вич, tr. Evgéniya Konstantinovna Leontóvich; March 21 or April 3 – April 3, 1993) was a Russian-born United States stage actress with a distinguished career in theatre, film and television, as well as a dramatist and acting teacher. In an obituary, she was described as "[o]ne of the most colourful figures of the 20th-century theatre, a successful actress, producer, playwright and teacher." She was nominated for a Tony Award for Best Lead Actress in a Play for William Saroyan's The Cave Dwellers.
Read more or edit on Wikipedia