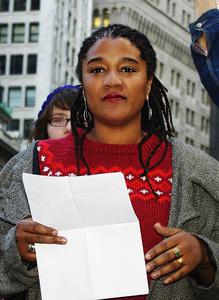 Lynn Nottage (born November 2, 1964) is an American playwright whose work often focuses on the experience of working-class people, particularly working-class people who are Black. She has received the Pulitzer Prize for Drama twice: in 2009 for her play Ruined, and in 2017 for her play Sweat. She was the first (and remains the only) woman to have won the Pulitzer Prize for Drama two times.Nottage is the recipient of a MacArthur "Genius" Fellowship and was included in Time magazine's 2019 list of the 100 Most Influential People. She is currently an associate professor of playwriting at Columbia University and an artist-in-residence at the Park Avenue Armory.
Read more or edit on Wikipedia